Rare 1851 Half Dollars in Dallas Auction 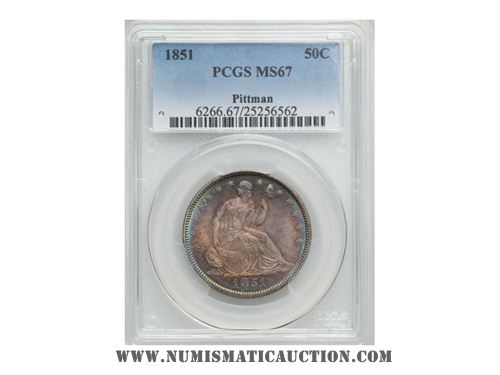 The finest known half dollars traces its history to the famous collection of John Jay Pittman. Pittman was a true connoisseur who would accept nothing less than the finest available specimens for his collection. After his death, the collection was offered by David Akers in a series of landmark auctions in the late 1990s.


"This is a superb coin, one of the prettiest coins from the standpoint of toning in the entire Pittman Collection. It is very sharply struck except on a few of the obverse stars. It has full frosty mint luster and gorgeous multicolored toning, medium reddish-gold and russet in the centers turning to violet, blue and greenish-gold at the borders. Under the toning, there are just a few trivial marks, and the overall eye appeal of the coin is absolutely first-rate. This is almost certainly the finest known 1851 Half Dollar and is distinctly finer than the Eliasberg specimen which was described as, 'Probably the finest known'.


Another great collector, Eugene Gardner, purchased the coin at the Pittman auction and retained it in his collection until it was sold by Heritage last June, realizing a record $49,937.50. At that time, the coin was certified in an MS66 PCGS holder. In his commentary in the lot description, Gardner noted, "It may sound presumptuous, but I was actually hoping for a higher grade from PCGS. There are no apparent flaws, and the coin, while on the dark side, is gorgeous." Gardner's comments were prophetic, as the coin now resides in an MS67 PCGS holder, making it even more desirable.


Randy Wiley and Bill Bugert list four die varieties for the 1851 Seated Liberty half dollar in their series reference. This coin represents the extremely rare WB-104 variety, with an errant 8 in the dentils below the space between the 8 and 5 in the date. When The Complete Guide to Liberty Seated Half Dollars was written, the only example of this variety known to the authors was the coin in the National Numismatic Collection at the Smithsonian Institution. The present coin is just the second example we are aware of, although some others may exist that have not been attributed.


The coin offered here is the finest-known example of an elusive date and an extremely rare die pair. For the Registry Set enthusiast, there can be no substitute for this MS67 PCGS example, as the finest NGC has certified is a single coin in MS66, and the second-finest specimen at PCGS grades "only" MS65.