lunaticg 8:25:00 AM
The finest known 1804 Class I silver dollar also known by collectors as "The King of American Coins" will be auctioned in the D. Brent Pogue Collection Part IV sale on May 24. 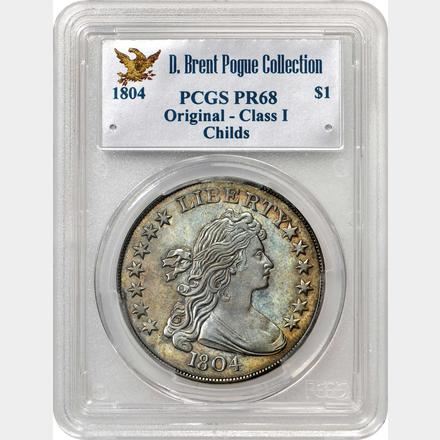 "The President has directed that a complete set of coins of the United States be sent to the King of Siam, and another to the Sultan of Muscat.” — Secretary of State John Forsyth to Mint Director Samuel Moore, November 11, 1834

For a long time the 1804 dollar has been honored as the “king,” such as in the popular Illustrated History of the United States Mint, published in the 1880s and 1890s in multiple editions, which commented, “This coin among collectors is known as the ‘king of American rarities.’ ”


In their 1906 catalog of the Major W.B. Wetmore Collection the Chapman brothers noted, “There are many very desirable coins here offered, notably the Grand Old King of American coins, The 1804 dollar, a coin the possession of which has afforded Major Wetmore much pleasure for nearly 30 years.”


The coin was a diplomatic gift in 1835 to Said bin Sultan Al-Said, the sultan of Muscat and Oman, from the United States. The coin was only sold at auction twice, first in a 1917 London sale, then in 1999 when the Pogue family acquired it for $4.14 million.


Stack’s Bowers Galleries, a rare coin auctioneer, will conduct the sale with Sotheby’s at its headquarters in New York City.