Only two of the medal known to exist according to Nicholas Rhodes; one in the ANS in New York and another awarded to Wazir Lab Joo of Kishtwar. There is no indication as to whom Spink medal was presented to, but it is housed in an envelope on which the number '13' has been written. 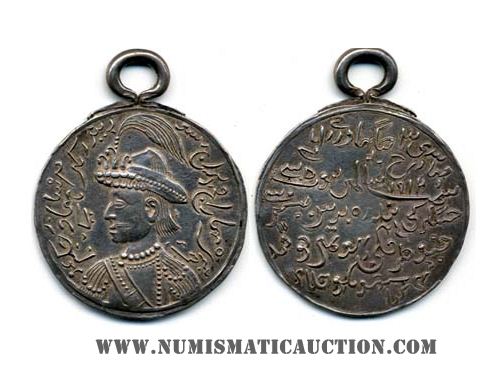 The medal issued by the Maharaja Surendra Vikram Shah (1847-81) to soldiers who fought in a campaign between Nepal and Tibet in 1841. Campaign medals are not difficult to find, but one only has to look at this particular medal to see that it is unusual with its magnificent, if naïve, depiction of the Hindu prince dressed in full regalia. The story behind its issue is even more extraordinary.


The legends, written in cursive Urdu, indicate that this medal was awarded by order of the Maharaja in SE1912 (1855) to prisoners released from Tibet no less than 15 years later.


The story starts in the 1830s when a Dogra prince, Gulab Singh, rose to power under Sikh patronage to become the Raja of Jammu. In 1834 he launched a successful invasion of Ladakh, led by his general, Zorawar Singh. 1841 saw Dogra's rule firmly established in this area, so Zorawar Singh was sent on a new campaign: an invasion of Tibet. This was an unmitigated disaster as the general was killed, his army suffered a heavy defeat and was then dispersed. Some of his soldiers were captured and taken to Lhasa as prisoners. They remained in Tibet until Jang Bahadur Rana of Nepal made a successful invasion of Tibet in 1855. One of the clauses of the subsequent peace treaty specified that the prisoners captured in 1841 be released. This had been inserted at the request of the British acting on behalf of Gulab Singh, who was now their ally and had been elevated to Maharaja of Kashmir.


The Mahraja was seeking to make a political capital from the repatriation of his subjects, however many of the erstwhile 'prisoners' had settled in southern Tibet and did not want to return. The British Resident was informed that 34 of the original soldiers had evaded detection altogether, and of the 106 that were finally mustered in Nepal, only 56 wished to return to Jammu. The others chose to remain in Tibet where they had families and a profitable livelihood. The 56 returnees were each given this silver medal and a robe of honour by the King of Nepal, therefore one may assume that only 56 medals of this type are in existence.