Am I Not a Man and a Brother Token

lunaticg 7:30:00 AM
Heritage auction offer an example of the famous "Am I Not a Man and a Brother" Hard Times token, graded XF40 by NGC as a part of our June 10 & 12 Long Beach Expo Tokens & Medals Signature Auction, Just four examples of this token are known. 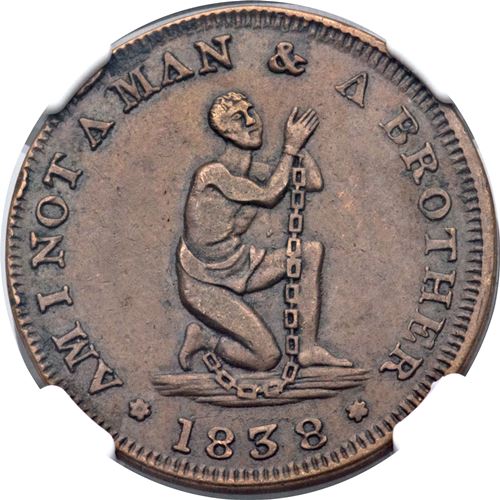 The other three specimens are the John J. Ford, Jr. example also in a major private collection, the Don Miller piece that is now in an advanced Long Island Collection, and the granular example that was recently discovered in Canada.


The John Ford example in the June 2004 offering of his Hard Times tokens was graded Extremely Fine and it realized $71,875 at that time. The Ford and Newman coins are virtually identical.


Heritage are unaware of the grade of the Don Miller example. Graded Fine Details with environmental damage, the Canada discovery piece was offered in the September 2011 Stack's-Bowers sale where it realized $37,950.


These tokens are patterned after late 18th century British Conder tokens. A similar token, Low-54, has a kneeling female figure and the inscription "Am I Not a Woman and a Sister"; those tokens are relatively plentiful. The Low-54A rarity is thought to be a pattern issue.


This attractive olive and chestnut-brown piece has exceptional surfaces with trivial rim bumps visible only under magnification. This important rarity, destined for a specialist's cabinet, represents an extremely important opportunity as many years can pass between appearances.