lunaticg 10:17:00 AM
A silver 1794 O-109 Half Dollar will be offered in Heritage Auctions' U.S. Coins Platinum Night held in conjunction with the Central States Numismatic Society convention (CSNS) April 22-27 in Chicago. The O-109 variant of the well-known 1794 Half Dollar, unique in silver. 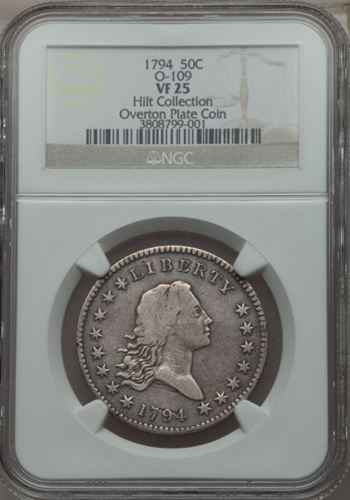 The half dollar appears at auction as part of the Liberty U.S.A. Collection, Part II, originally built by Robert Hilt, and has been hidden away for decades.


"This die pair was previously known only in the form of two copper impressions; one of which is housed in the Smithsonian Institution, and the other in a museum in Vienna, Austria," said David Mayfield, Vice President of Coin Consignments at Heritage. "It is an incredible rarity and one that sets the stage for what we think will become a very successful auction event in Chicago."


This coin was unknown to Al C. Overton's "Early Half Dollar Die Varieties 1794-1836" and unlisted in either his 1967 or 1970 editions. This specimen was initially described and illustrated by Robert P. Hilt, II, in "Die Varieties of Early United States Coins,"(RTS Pub. Co., 1980) and was first recorded in the 1990 Third Edition of the Overton reference. The obverse is illustrated in the Fifth Edition of Overton, while the reverse plated therein is from an example of O-105. The coin was just recently certified and is now housed in an NGC VF-25 holder.


Hilt cherrypicked this coin sometime in the late 1970s, but Heritage have no knowledge of the earlier ownership. The present sale is the first time the 1794 O-109 has been offered for public bidding competition.