lunaticg 8:35:00 AM
A 1792 Birch cent coin from the Henry P. Kendall Foundation Collection is estimate to sell over $2 million (current bid $600,000) in Stacks Bowers Baltimore Auction. The choice 1792 Birch cent acquired privately in 1975 from Stack’s and the finest example offered since the 1979 Garrett I sale.


Stack’s Bowers Galleries is proud to present the first of three official 2015 auctions for the Whitman Coin & Collectibles Expo. The sale is presented in three authoritative catalogs and will be held in Baltimore March 26-27 and March 30-31. The first session of the sale offers the U.S. colonial era paper money of the Henry P. Kendall Foundation Collection. Following this, the second and third sessions feature impressive U.S. paper currency from The Holecek Family Foundation Collection and Part III of the Peter Mayer Collection.


The 1792 Birch cent is one of the first pieces of U.S. currency ever minted, and it's one of just seven of this particular design that remain. 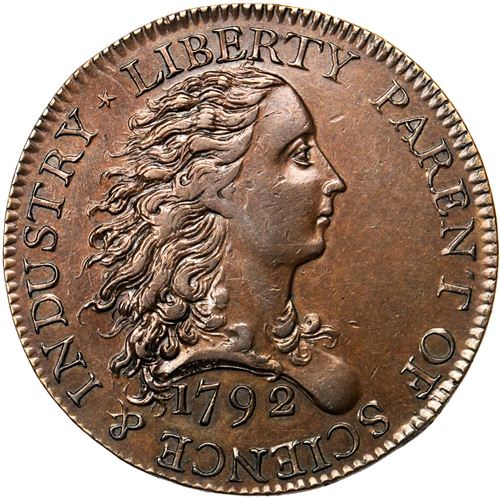 On one side of the copper coin, a young woman with curly hair (blown back as if in Revolutionary wind-tunnel), sits in profile, surrounded by the words “Liberty Parent of Science & Industry.” According to the lot notes, the face was chosen after a conference in the fledgling U.S. house, which decided on lady liberty—against the wishes of the U.S. Senate, which apparently lobbied for the face of George Washington, then the sitting U.S. president. 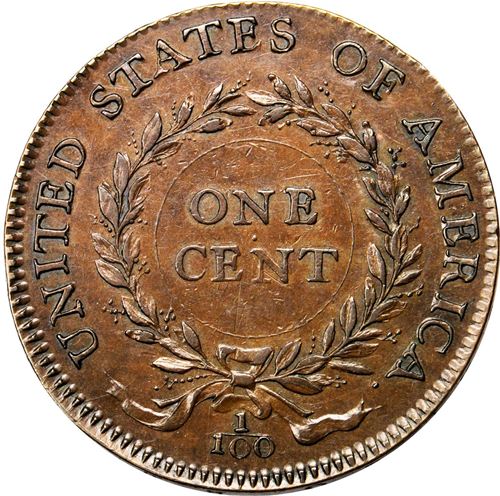 On the reverse, a laurel wreath surrounds the words “One Cent,” which is surrounded, in turn, by “The United States of America” in a larger font. In case there was any confusion about the value of the currency, there’s a helpful 1/100 underneath the wreath.


There are four varieties of 1792 Birch cents. The rarest, and likely the first one struck, exists only in white metal, with a reverse inscription that includes "G*W. Pt.," a reference to Washington that may have been a political hat-tip to the failed Senate version of what became the Mint Act of 1792, which called for a portrait of the President to be depicted. The House version, which won in conference, preferred an image of Liberty. The G*W. Pt. Birch cent attempted to please both parties and was, clearly, an abandoned experiment; just one has survived. The other three varieties of Birch cents are all struck from these dies but with three different edge types: plain edge (Judd-3, two known), edge with TO BE ESTEEMED * BE USEFUL * (Judd-4, seven known), and edge with TO BE ESTEEMED BE USEFUL * (Judd-5, two known).


“We are proud to continue our tradition of presenting the most important collections of colonial coins at public auction. Over the years, we have sold more of these name collections than any other firm, and the Henry P. Kendall Foundation Collection will enter the annals of numismatic history alongside the collections of such luminaries as Richard Picker, Laird U. Park, Norweb, Garrett, John J. Ford, Gilbert Steinberg, Reed Hawn, Taylor, Oschener, Donald Groves [Partrick], the Massachusetts Historical Society, the Boston Museum of Fine Arts, the Hain Family, Jack Royse, and Ted Craige,” noted Lawrence R. Stack, Founder of Stack’s Bowers.


“We are very pleased with the catalog which resulted from a true team effort,” said Brian Kendrella, President of Stack’s Bowers.


“From the cataloging of these important rarities by John Kraljevich and others on our team, to layout and design choices, this special catalog will long stand as an important reference for collectors and numismatic scholars. We expect that once collectors see how special these coins are, the competition in the auction room will be intense.”


Lot viewing will take place in New York from March 18-21, 9 am to 6 pm each day, and then in Baltimore beginning on Tuesday, March 24 at 9 am, continuing each day through 7 pm. For a complete schedule of lot viewing and session times, please refer to www.stacksbowers.com.