lunaticg 8:41:00 PM
The exceptionally rare 1879 $20 pattern, known as a "Quintuple Stella", struck in gold, and second finest certified realized a record $1,880,000 (icluding 17.5% buyer's premium). The Brand-Carter-Trompeter-Simpson Duplicate example was sold to Greg Rohan of Heritage who "purchased the coin on behalf of a private collector who wishes to remain anonymous." 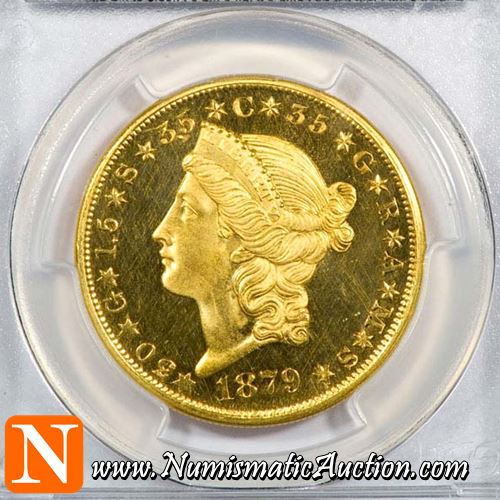 The most recent sale of a Quintuple Stella was the PCGS PR62 CAM Garrett-Trompeter coin that realized $862,500 in January 2007.


The Brand-Carter-Trompeter-Simpson Quintuple Stella has not appeared at auction since February 1992, where, even back then, it realized $187,000.


"Overall, the Regency Auction XVII exceeded my expectation. We set more record prices than we thought possible given the current market conditions," Laura Sperber declared after the sale. "The sale of the Quintuple Stella at $1,880,000 proves that the big money will come out for the special coins."

Sperber continued, "For this sale, we had several hundred new registrants, many of whom were winning bidders. The activity on the internet, prior to, and during the sale were at record levels for LRCA, both people watching and bidding. We are very pleased to see the market is clearly alive and well, and continuing to recover from the 'perfect storm' that hit the market earlier this year."


There are five specimens known, one of which (the Brand-Menjou-Farouk-Stack’s coin) is permanently impounded in the National Numismatic Collection at the Smithsonian Institution. The finest (per David Akers) is the Olsen-Wilison-Akers-Holecek-Southern-Collection- Bob R. Simpson piece. Followed by this one, which is the Virgil Brand-Amon Carter- Ed Trompeter-Bob R. Simpson Duplicate.

Among the many highlights: