lunaticg 10:03:00 AM
On Jun 28, 2015, GreatCollections auctioned a 1966 Half Dollar, that was recently graded by PCGS as Specimen-68 DCAM. After spirited bidding, the coin realized $14,850, including the 10% buyer's fee, shattering the previous auction record for the coin. 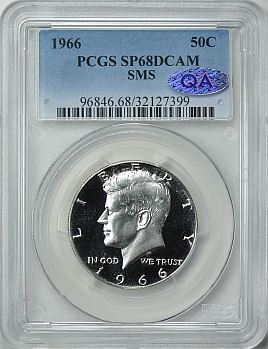 The coin was recently discovered by a collector searching through thousands of Special Mint Sets.


The Kennedy half dollar, first minted in 1964, is a fifty-cent coin currently issued by the United States Mint. Intended as a memorial to the assassinated President John F. Kennedy, it was authorized by Congress just over a month after his death. Use of existing works by Mint sculptors Gilroy Roberts and Frank Gasparro allowed dies to be prepared quickly, and striking of the new coins began in January 1964.

GreatCollections is an auction and direct sale venue for PCGS, NGC and ANACS certified coins, as well as coins approved by CAC.