Three important collections are to be auctioned during the three-day ‘coins festival’; The Harrington Manville Scottish Silver Coins 1660-1800 collection, Theo Bullmore Collection of Irish Coins, Charles I and the Great Rebellion and The Paul Cattermole Collection of British Sixpences.


“This will be a very special few days with collections put together by three men with different specialist interests but the same discerning eye becoming available to the market,” says Christopher Webb, head of the coins department at Dix Noonan Webb. “We are proud to be holding this exceptional series of auctions.” 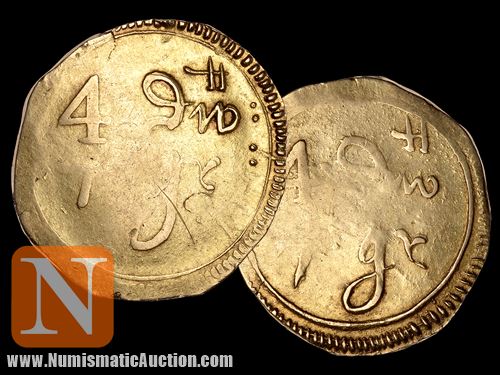 The Duke of Ormonde, Lord Lieutenant of Ireland and the Royalist commander in Dublin during the Civil War, issued instructions that gold was to be melted down and converted into ‘pledges’ to alleviate the currency shortage suffered by the King’s garrison in Dublin in 1646. This currency of necessity represents the only gold coinage of Ireland and the example to be auctioned from the Bullmore Collection is believed to be one of only two available to the market.


Other important coins from the Theo Bullmore Collection include an extremely rare Confederate Catholics ‘Rebel Money’ Halfcrown, estimated at £10,000 to £12,000, and a very rare Charles I Dublin Money Crown, expected to fetch £6,000 to £8,000.


Harrington Manville, whose Collection of Scottish Silver Coins 1660-1800 will be auctioned by Dix Noonan Webb, was one of the world’s most renowned experts on British numismatics. The retired American diplomat, who died aged 85 in February this year, was the author of the magisterial Encyclopaedia of British Numismatics, which was published in six parts between 1986 and 2014. As a collector, researcher and author, Manville, always known as Harry, was a significant contributor to knowledge about British numismatics over almost half a century.


One of the rarest pieces in his Scottish collection is a Charles II first coinage four Merks dating from 1664. This example is almost certainly the finest specimen of the Scottish silver coin available to the market and is expected to fetch £6,000 to £8,000. It was once in the famous Bridgewater House Collection begun by John Egerton, the second Earl of Bridgewater, in the 17th century and largely completed by 1740. The Bridgewater House story shows us that 17th and 18th century coins were being acquired contemporaneously by collectors during this period. The collection was later placed in the British Museum for safe keeping, where it remained from about 1850-1900.


The Paul Cattermole Collection of British Sixpences will also be auctioned during this three-day period. Cattermole, who worked for an insurance company in Surrey until he retired in 2008, has collected coins since the 1960s and more recently specialised in halfpence and sixpences. He has reluctantly decided to sell the latter from his collection to finance continuing to buy halfpence. Among the rarities to be auctioned at Dix Noonan Webb will be a 1555 sixpence from the joint reign of Philip and Mary, estimated at £1,200 to £1,500, and an Elizabeth I 1561 sixpence with a superb portrait of the monarch, which should fetch £500 to £700.