lunaticg 7:58:00 AM
The official auction of the July 9-12 summer Florida United Numismatists (FUN) auction is open for bidding now. More than 1900 Floor session lots, of which 440 are featured in the Premier session to be held leading off the auction on July 9. Nearly 1400 additional lots are scheduled for the live Signature Internet session. 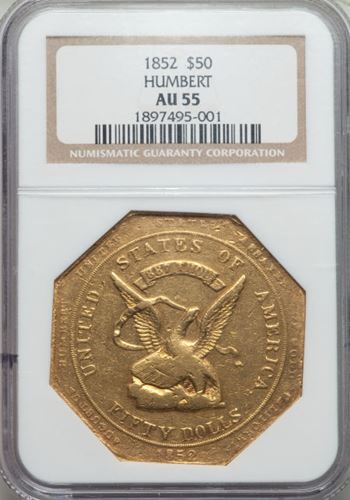 Featured collections include the outstanding US Territorial and Federal gold coins from the Twin Peaks collection, one of the coins in the collection is a 1852 Humbert Fifty Dollar, Reeded Edge. The fifty dollar gold "slugs," as they became known, were the first gold pieces produced by the United States Assay Office in San Francisco in 1851, and were, at the time, the smallest denomination authorized by Congress.


The auction also featured the seated half dollars in Part Two of the Dr. Harry Salyards collection. In addition, the auction boasts a small but impressive contingent of Colonial coinage.

Just a few of the individual highlights of this auction include:


You can start your bid on this summer Florida United Numismatists (FUN) auction at www.HA.com/coins!