lunaticg 7:17:00 AM
A 1838-O Eliasberg Reeded Edge half dollar PR64 NGC sold for $646,250 in the Part III of the Eugene H. Gardner Collection of U.S. Coins Auction on Tuesday, May 12, 2015, at the Waldorf Astoria in New York. The third of four unreserved auctions presented by Heritage Auctions brings $13.78 million.

More than $47 million realized so far across three Gardner auctions, with one more to go. 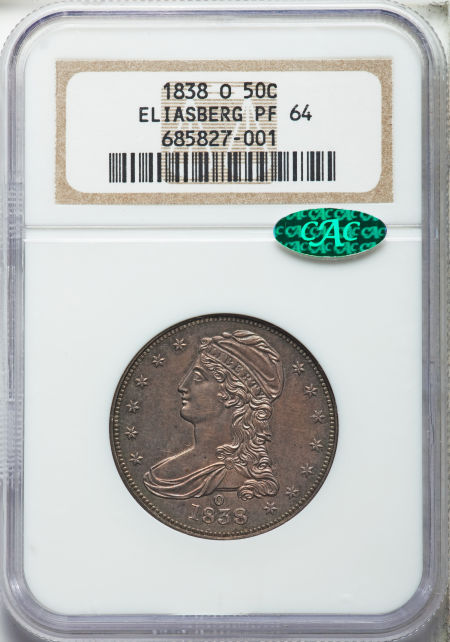 The top collectors were out in force at the auction and no coin drew more interest, or a greater final price realized than the 1838-O Eliasberg Reeded Edge half dollar PR64 NGC, a legendary coin. After spirited bidding the coin finished the day at $646,250.


"The demand for Gene Gardner's astounding collection continues to skyrocket, as do the prices realized," said Greg Rohan, President of Heritage Auctions. "With this event, the collection has now realized more than $47 million. That's an astounding figure even by Heritage's own very high expectations for this magnificent collection."


Gardner's rare and valuable 1870-S Seated dollar XF40 PCGS, with a pedigree that reads like a who's who of numismatics, proved quite popular to the tune of a $505,250 final price realized, while the 1873-CC No Arrows Seated quarter MS 63 PCGS, which traveled from the hands of the U.S. Assay Commission to an equally storied selection of owners, realized an impressive $376,000 final price.

Further highlights include, but are not limited to:


You can visit Heritage Auction website www.ha.com for information about Part IV of the Eugene H. Gardner Collection of U.S. Coins Auction.