Home Bond Share Bonds and Shares in Spink 29 May Auction

Bonds and Shares in Spink 29 May Auction 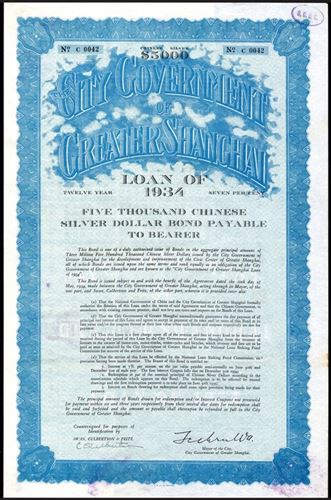 One of the best pieces is lot 191, a City Government of Greater Shanghai loan of 1934, bond for $5000 Chinese silver dollars, which is being offered at auction for the first time. This previously unknown large denomination of this rare loan is likely to attract much attention.


The sale also offers a fascinating view into the past, showcasing some very interesting historical documents. Lot 382, is a 1642 receipt of £15 for payment towards 'Arming maintaining and paying of Souldiers', a small format printed document with manuscript insertions, issued with interest according to the Parliamentary Ordinance of the 14th November 1642. Ordinances were in effect Acts of Parliament but styled in this way because King Charles I would not assent to the bills of a Parliament at war with him. This was issued just months after the start of the Civil War. Charles I was driven out of London and forced to retreat to Oxford where he had to set up an impromptu mint to pay for his troops. Meanwhile, Parliament was able to fund their opposing army in the ordered and democratic system that we know today. At the time however, a Parliament mobilising opposing forces would have been considered an act against not only the King, but through his position as head of the Church of England, an act against God too. The amount of cultural struggle that is encapsulated within this receipt is staggering.


Not to be outshone, Europe also offers a classic piece of world history: lot 348, a Compania General de Comercio de los Cinco Gremios Mayores, certificate for one share from 1773. It is printed in black, on vellum, with beautiful vignettes of the Madonna of the Rosary and St. Francis of Assisi and hand signed by Joseph Martin de Layseca and others. The Five major guilds of Madrid were to become one of the most important business groups in the Spanish Empire, conducting general trading business but also banking and insurance, much of it for the State. They even helped significantly with financing the Imperial and Royal Canals for the city. However, by the late 1780's it was weakened by heavy competition with the Banco de San Carlos and the decline of the Treasury caused by the Napoleonic Wars. This lot is one of the rarest documents of 18th century Spanish trading companies and in excellent condition. 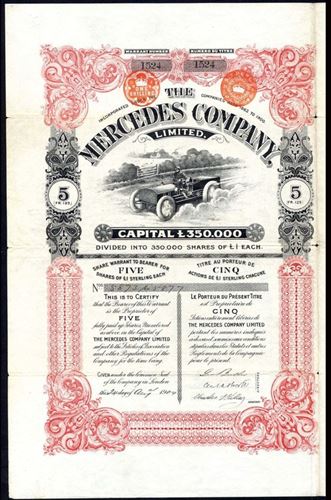 Switching gear a little, the sale also contains a Mercedes Company Ltd., bearer certificate for 5 shares of £1, 1904. The certificate shows a vignette of a Mercedes racing car with text in English and French. A rare piece that is sure to get all motor fans interested and excited!


Catalogues can be accessed through the Spink website ( www.spink.com ) or via the Spink App for iPhone and iPad.