lunaticg 8:21:00 AM
Spink will feature a great selection of black and white notes and other Bank of England prefixes and low numbers in their May 6th British Banknotes Auction. Of great interest is a group of Scottish notes from the Clydesdale Bank. These are all low or interesting numbers from the new £5 Polymer issue, including the numbers 000001-000010! 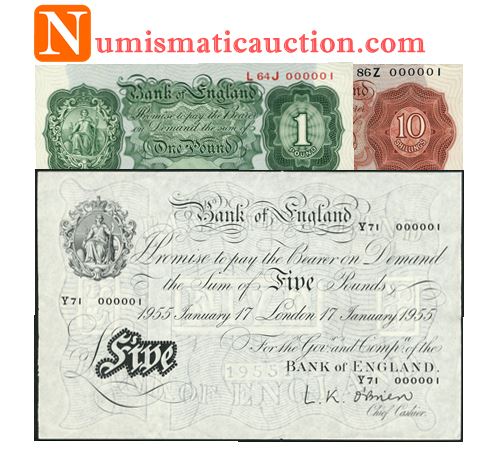 Three notes, bearing the signature of L.K.O'Brien, the Chief Cashier in 1955, are likely the latest dated true number 1s that will ever be available on the open market. This is quite probably a once in a life time opportunity for collectors.


With any country, banknotes with low serial numbers attract a premium. If you are lucky enough to own a note with the serial number 1, that premium will invariably be very large. However, Bank of England notes may well be the best of all in this regard. This is because, since the late 1950s, all first issue notes with serial number 1 have gone straight to the Queen and are kept in the Royal Collection. 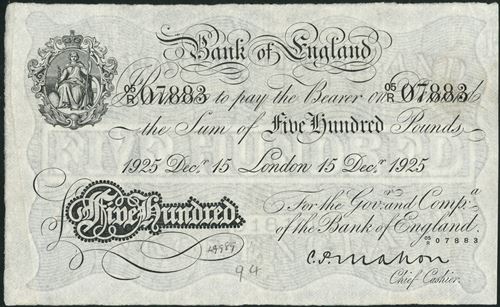 
£500 notes of this period are excessively rare and were probably, along with their big brother, the £1000 note, exclusively used for interbank transactions and property deals (this could have represented enough to buy a semi detached house in Balham!). The note is indeed a rare find.


Catalogues for May 6th British Banknotes Auction can be accessed through the Spink website www.spink.com or via the Spink App for iPhone and iPad.

True number 1s of British notes in Spink auction lunaticg 2015-04-21T08:21:00-07:00 Spink will feature a great selection of black and white notes and other Bank of England prefixes and low numbers in their May 6th British B...
Banknote
Low Number
News
United Kingdom