lunaticg 7:48:00 AM
A 1880 $4 Coiled Hair Stella PR67 NGC CAC will be offered by Heritage Auctions' in their April 22-26 Central States Numismatic Society (CSNS) Signature® Auction. The rarest of the four Stella varieties and the ideal Registry Set candidate is one of the most desirable and important Stellas available to collectors. 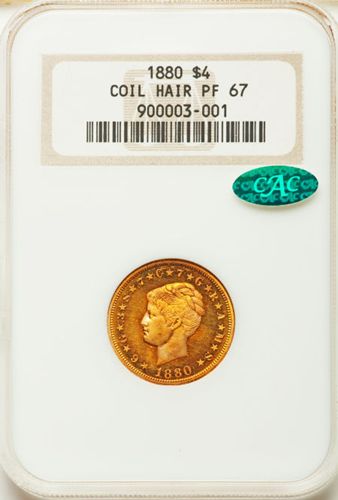 "The 1880 Coiled Hair Stella is, in no uncertain terms, an extraordinary issue and one of the great treasures in United States numismatics," said Greg Rohan, President of Heritage Auctions. "It's the rarest date in a series renowned for remarkably low production totals across the board. In addition to the issue's fascinating history, this particular representative's outstanding preservation and corresponding high technical grade undoubtedly make it one of the most desirable and important Stellas available to collectors."


The Stella was originally intended — as proposed in 1879 by John A. Kasson, Minister Plenipotentiary to Austria — as a $4 metric gold coin to be used for foreign trade. It never matched up directly with the foreign currency it was supposed to match and the idea was soon abandoned, leaving just a few examples as treasures for numismatists.


A second rare Stella, this an 1879 $4 Coiled Hair Stella PR65 PCGS CAC, follows its 1880 counterpart across the block. This particular Stella is one of just 12 of the very rare Judd-1638 patterns traced, 12 examples traced. It is, without a doubt, one of the premier rarities in American numismatics. The New Orleans Collection 1880 $4 Flowing Hair Stella PR66, the finest Non-Cameo PCGS, a legendary gold pattern, presents another significant opportunity to the right collector.