The well-rounded selection of nice collector material offered in this auction is being brought to the CICF for the first time, bringing this material directly to its collector base at the show. 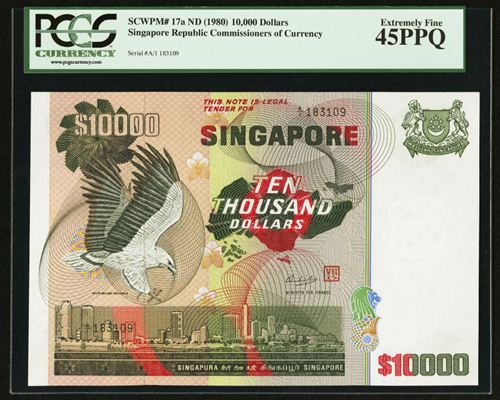 The 1980 Singapore $10000 note escaped any amount of real circulation, and the folds that account for the grade are nearly invisible through the holder, making them more minor bends than anything else.


It is unusual when an auction contains one Singapore $10000 note, and this auction features no fewer than three. Lot 26267 is a Commissioners of Currency ND (1987) Pick 26 in the very unlikely grade of PMG Very Choice Uncirculated 64. Part of the Ships series, the Gem sized margins frame the wildly bright printed colors. Both of these notes bear estimates of $17,500-$22,600. Lot 26268, a Commissioners of Currency ND (1999) Pick 44a, is a beautifully original example with full margins, well embossed paper with brightly printed design details graded Gem Uncirculated 66 EPQ by PCGS. It is estimated at $10,000-$15,000.


Heritage has offered countless Canadian rarities, and just when you think you have seen them all along comes a note that really grabs your attention. According to the Charlton guide a miniscule three examples of the 1901 Bank of Commerce $5 displaying the red "Dawson" overprint are known to exist, and we are privileged to offer an example graded Fine 12 by PMG as lot 26049. The overprint is quite vivid and certainly adds to the eye appeal of this note. This note will offer one fortunate Canadian collector the opportunity to add this rarity to their holdings. It is estimated at $17,500-$32,500.

Other highlights of this auction include:


This auction is open for bidding now at www.HA.com/currency.