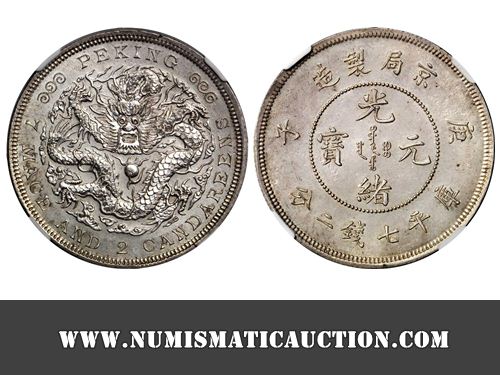 The very rare 1900 Peking (Beijing) mint Pattern Dollar series restrike in silver from original dies. The Peking series of coinage is easily one of, if not the rarest of all Imperial era machine struck coin series, and although the restrikes exist they too are quite rare. Initiated in 1900 as a central mint series and was intended to circulate alongside the provincial dragon coinage. The dragon coinage had been the normal currency throughout most of China for roughly the preceding twelve years. The dies were prepared in England and sent to the Peking mint where a small number of five denomination sets were struck with plain edges and incised serial numbers on the edge. After this initial striking, references on the fate of the Peking series start to diverge slightly, but all of them seem to agree on the following series of events. During the chaos of the Boxer Rebellion (1900-01) the Peking mint was destroyed after only about two years of operation, and a set of dies (accounts differ, some say it was a full set of five dies some say it was only four dies) was "saved" by a worker there. From here the dies were sold, traded and passed through a few sets of hands before landing in the hands of a coin dealer in Shanghai. This dealer began striking small quantities of restrike sets by most accounts up through about the middle of the Republic era. The restrikes are identified by their reeded edges and pitting that is evident on the surface from rusty areas on the dies, as we can see in various spots on this piece. A handsome and dynamic design which is quite different from other dragon coinage of the time and is similar in form to the later "dragon in clouds" design of 1911. This example struck on nice lustrous metal with only a hint of golden toning at the rim. Used as a plate example in "Top Chinese Coins" by Chou, Guth and Smith. An exceptional and seldom offered type sure to attract spirited bidding. One of very few examples certified with none having been graded by PCGS, unfortunately the NGC population is unavailable. NGC MS-63. The coin is estimate to sell for $100000.00- $150000.00. 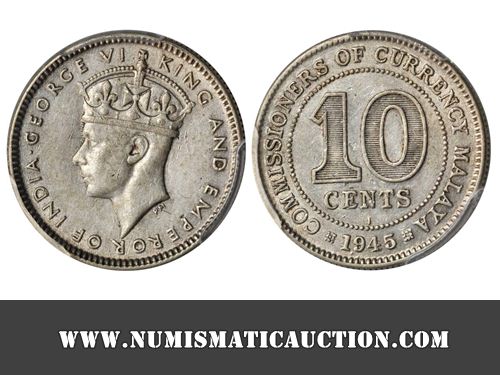 The 10 cents Malaya 1945i appears as lot 10108, seldom seen issue from the closing days of World War II. Struck with the letter "I" below the denomination to denote being minted at one of the Indian Government mints, in this case the mint in Bombay. Prior to the close of the war with Japan, the British government had laid plans for a smooth transition from military governance back to local government control as a protectorate. One of the crucial aspects they anticipated was the need for a reliable supply of coinage to replace what was lost during the Japanese Occupation. Thus massive quantities of coinage were planned and produced for British Pacific holdings including Malaya. To ease the production strain on the Royal Mint, the Indian mints at Bombay and Calcutta were utilized for some of the mintages as they had been for previous issues. With the surrender of Japanese troops in August of 1945, stockpiled coins which had been minted in 1943/4 were immediately issued and production of a 1945 issue began. The minting of these new 1, 5, 10 and 20 Cent pieces continued into 1946, though the date of 1945 was still used. Of the three denominations struck in India and bearing the "I" mintmark, only the 5 Cent pieces were struck in any major quantity. With fewer than ten pieces known of the 10 Cents, this is one of the key dates not only for this specific series but for British coinage from this region. Lightly toned and handsome. The Boon plate coin and the only example certified by PCGS. PCGS EF-45 Secure Holder. The coin is estimate to sell for $8000.00- $10000.00. 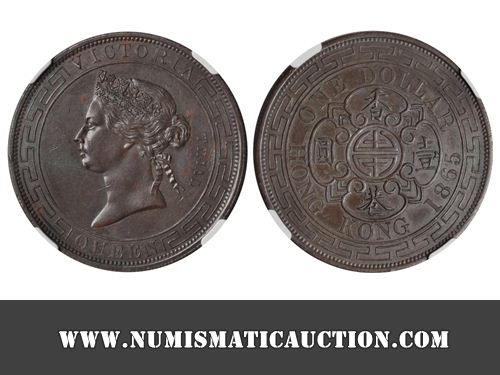 
Following the medals, orders, and decorations, Stack’s Bowers and Ponterio is extremely pleased and honored to be able to offer coins from the W&B Capital Foundation Collection, an assemblage of rare, high grade, historic, and valuable Chinese coins. The W&B Capital Foundation, a private family foundation for arts and antiques collectors, was founded in the late 1970s and has headquarters in Hong Kong and Canada. Inspired by the well-known late architect Victor Chu, the foundation’s members began to focus on the coin market in China in the early 1980s by actively engaging in different international exhibitions. They established their exclusive collecting system and market, building a fabulous collection through international auctions as well as private sales.


Richard Ponterio, Executive Vice President, and Nirat Lerchitvikul, Director of Asian Operations, note that: “The number of important coins in this collection is remarkable. This is an important opportunity for serious collectors of Chinese numismatics that should not be taken lightly. Many of these coins have been removed from the market for 20 years or more, and this may be the only chance to acquire these specimens, as they may disappear from the market for another 20 years, ensconced in the next collections they grace.”


Stack’s Bowers and Ponterio President Brian Kendrella added, “We are truly honored to be chosen by the W&B Capital Foundation to auction these important numismatic treasures of China.” “This is another wonderful collection of coins that our firm has been able to bring to the market in Hong Kong, and will join the ranks of the Wa She Wong, Demarete, Ken Bressett, ANS Duplicates, Craig Family, and other collections that we have sold since our first Hong Kong sale in December 2010,” Richard Ponterio stated. 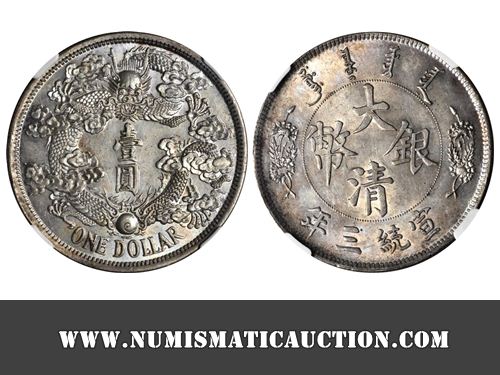 Among the many highlights from the W&B Capital Foundation consignment is lot 10211, “Reverse Dragon” Pattern Dollar of 1911, graded MS-63 (NGC). The proposed pattern for the 1911 "dragon in clouds" Empire Dollar of L&M type 37. EXTREMELY RARE. Type II pattern with dragon reversed from what later became the adopted design with raised veins on leaves. Minor other stylistic variants differ from that of the adopted design, including the general design of the dragon's body and claws. Beautifully struck on a lustrous planchet. Nice medium toning with some subdued gold and blue hues. A very desirable Empire rarity. Tied with one other piece at NGC, with one piece finer. PCGS grades this issue as specimen, which there are two in this numeric grade and four finer. NGC MS-63. 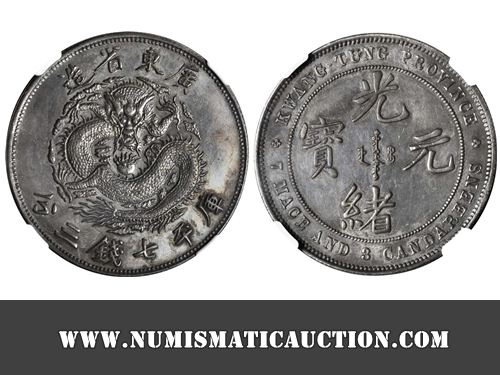 Another highlight for the W&B Capital Foundation consignment is lot 10242, 1889 7 Mace 3 Candareens piece of Kwangtung. Kwangtung was the first provincial mint to utilize modern coinage equipment, contracted from the Heaton Mint in Birmingham, England. These 7 and 3 silver dollars were struck with a higher silver content than the Mexican 8 reales then in circulation in order to drive them out. When this was done, the standard was reduced to the 7 mace and 2 candareens content that became standard. This first “Dragon Dollar” is also historically important as the earliest Chinese dollar to feature the dragon motif that became the standard as well.