lunaticg 1:44:00 AM
A $100 1890 Watermelon Note from the prestigious Eric P. Newman Collection is expected to bring $150,000+ in Heritage Auctions' Central States Numismatic Society Currency Signature Auction April 22-28 in Chicago. The banknote is just one of 35 known to exist.

The Watermelon Treasury Notes, so named because the zeros printed on the backs resemble watermelons, are highly sought-after by collectors. The Newman example is one of the very few to have survived circulation, and is being offered at public auction for the first time. 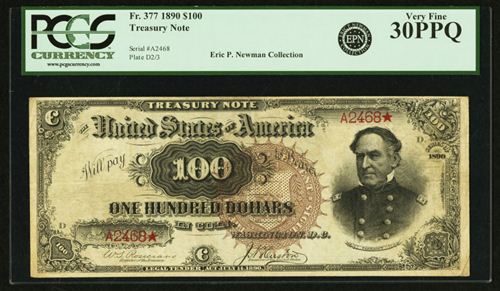 "The coveted Eric P. Newman Collection pedigree has set the standard in coins and we expect a similar response when these rare and truly historic pieces of currency are finally brought to public auction – in some cases for the first time in their history," said Dustin Johnston, Director of Currency Auctions at Heritage. "This entire auction is set to redefine the phrase "fresh to market." 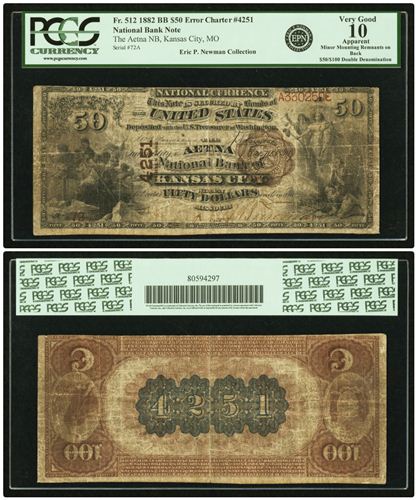 Many examples of the Midwestern frontier obsolete banknotes and scrip from the Newman collection are exceptionally historic and of the highest rarity, including a $1 note issued by Clark, Gruber & Co. from Leavenworth, Kansas; it is considered a giant of the entire Obsolete note canon (est. $25,000+). This 1862 note directly links the founding of the bank and note issuance in Leavenworth to the eventual office in Denver that printed $5 Denver Gold demand notes known as proofs and remainders. That very Denver office would later become the Denver Mint. 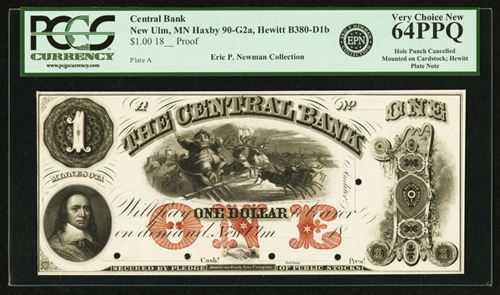 The only Minnesota "Santa Claus" note known to exist, a $1 vignetted type note features the Type III style Saint Nick prominently in the center (est. $25,000+) and a majestic serial No. 1 American $1 banknote from Dubuque, Iowa, from 1860 is considered the greatest of all Iowa Obsoletes for both its rarity and outstanding condition (est. $10,000+). A Superb Gem $2 proof from Madison, Wisconsin, printed on India paper features a full-color portrait of James Madison flanked by a farmer and an Indian (est. $4,000+).


Items being sold are from the extensive collection of Eric P. Newman Numismatic Education Society (a Missouri not-for-profit corporation) and have been assembled over a period of 90 years. Proceeds of the sale of all items will be used exclusively for supplementing the Society's museum operations and scholarly numismatic research efforts and for the benefit of other not-for-profit institutions selected by Eric P. Newman Numismatic Education Society for public purposes.


Highlights from additional collections offered during the CSNS Currency Signature Auction include, but are not limited to:


This auction will open for bidding soon at www.HA.com/currency.