The Feb. 28 sale focuses on North American numismatic literature, and features 380 lots ranging in estimated value from $20 to $2000. All lots are illustrated and feature the full descriptions collectors have come to expect from Kolbe & Fanning. 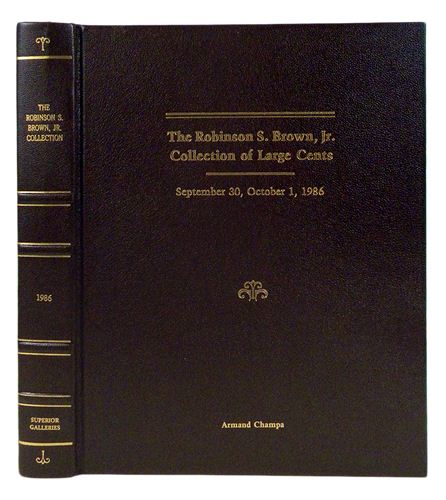 The Robinson S. Brown, Jr. Collection of Large Cents 1793-1857 Deluxe leather-bound presentation editions (lot 337) is a Armand Champa's copy, with his name stamped in gilt at the base of the upper cover. Signed by Jack Collins on the half-title, and inscribed by Robbie Brown to Champa ("To Armand--Congrats on getting this book. It was very exciting for both of us.") Laid into this copy are: four color photographs depicting Armand and Kay Champa, Jack Collins, Robbie Brown, Del Bland, John Bergman, Julian Leidman and others; a black and white photograph taken during the sale, depicting many of the participants; two letters from Larry Goldberg to Champa; an invitation to a cocktail party held on Sept. 28 at the home of Marilyn and Larry Goldberg for those attending the auction; and Champa's invoice for this copy (for which he paid $6050).

Among the other highlights of the auction:


A substantial group of catalogues of the New Netherlands Coin Company, including many early sales (lot 255).


A copy of the scarce catalogue of the Dr. Edward Maris sale (H.P. Smith, 1886), with two of the photographic plates (of six called for), both featuring New Jersey coppers and both annotated by F.C.C. Boyd (lot 292).


Bowers and Ruddy Galleries. The United States Gold Coin Collection. 1982. The Special Hardbound Edition of the catalogue of the magnificent collection of United States gold coins formed by Louis Eliasberg, along with the scarce photo enlargements offered separately by Bowers and Ruddy. (lot 83)


Stack's. Catalogue of The E.M. Wharton and Others Collection of United States and Foreign Coins. New York, 1945. (lot 299).


The online sale is available now for browsing and absentee bidding at auction.numislit.com. A PDF of the catalogue can be downloaded for the convenience of the reader through the firm's regular website at numislit.com. While bidders are encouraged to bid through the online platform, bids may be submitted through the traditional methods as long as any such absentee bids are received by Kolbe & Fanning by the day before he sale. Absentee bids may be placed directly online at any time prior to the lot being sold. On Saturday, Feb. 28, beginning at noon eastern time, the sale will be conducted as a live internet auction.