lunaticg 7:14:00 AM
Paper Money Guaranty (PMG) a leader in third-party note grading service has just graded its 1 millionth note, an achievements that comes as PMG celebrates its 10-year anniversary. Founded in 2005, PMG quickly grew to become the world’s largest third-party paper money grading service because of its industry-leading guarantee of grade and authenticity as well as its unwavering commitment to accuracy, consistency and integrity. 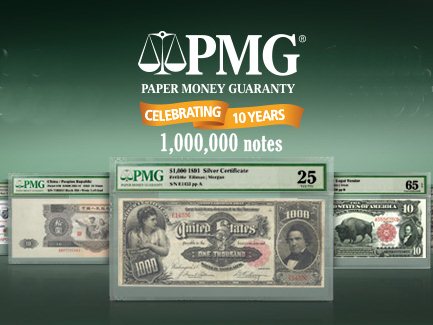 “This remarkable achievement illustrates the transformative effect that PMG has had on the hobby of paper money collecting in the last decade,” said Mark Salzberg, chairman of Certified Collectibles Group (CCG), the parent company of PMG. “Collectors and dealers around the world have embraced PMG because of the added confidence that comes from its expert grading, resulting in higher prices realized and greater liquidity for PMG-certified notes.”


Headquartered in Sarasota, Florida, PMG has opened offices around the world to keep up with the growing demand for its expert authentication and grading services. PMG now has locations in Hong Kong; Munich, Germany; Zurich, Switzerland; Shanghai and Guangzhou, China; Singapore; and Seoul, Korea.


“These figures reflect PMG’s position as the market leader and the market’s widespread acceptance of PMG certification,” added Salzberg. “We are honored by the support that we have received and we will continue to expand upon our role as the world’s preferred third-party paper money grading service.”

Congratulations to Paper Money Guaranty (PMG) for their anniversary and achievements.