lunaticg 7:43:00 AM
The last prefix for the 1944 Palestine 5 Pounds banknote will be sold in an auction slated for Tuesday, March 10, 2015 by Archives International Auctions. More than 1,040 lots of US and worldwide banknotes, Federal bonds and documents and security printing ephemera will be offered in Archives International Part XXIII auction. 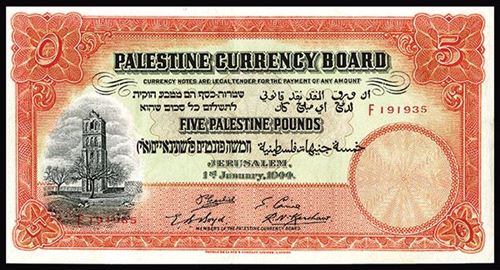 “We are privileged to offer an exceptional collection of Middle Eastern banknotes that possibly could be one of the most significant groups of rare notes to be offered in the United States ever,” said Dr. Robert Schwartz of Archives International Auctions. “It’s nearly 100 banknotes, with many rarities missing from even the most advanced collections, a truly outstanding collection.”


Dr. Schwartz continued, “Even with all of the rarities in the auction, the beginning to advance collector is bound to find something within their budget and collecting tastes and we expect the auction to be extremely active.” The auction will begin with 800 lots of foreign banknotes, to include the Middle Eastern collection described above in addition to rarities by other consignors.


The collection of Middle Eastern notes are from Palestine, Syria, Iran, Lebanon, Kuwait, the United Arab Emirates, Egypt, Sudan and other countries. Included are sequential pairs of Palestine Currency Board £1 and £5 notes dated 1944 with rare prefixes never previously offered at auction, 1941 Egyptian specimens of 5 and 10 pound notes by Bradbury, as well as many other Egyptian specimen notes.


Iran is represented by over 25 lots, including two Imperial Bank of Persia specimens, many later specimens and four original Central Bank of the Islamic Republic of Iran, Serial #1 to 100 packs. Bank Leumi Le-Israel B.M. is represented by numerous high grade banknotes.


Jordan includes over 20 lots of Jordan Currency Board and Central Bank of Jordan specimen and issued notes. It includes a Currency Board 1949 second issue specimen set of four notes as well as many other rare issues. Lebanon will feature 13 lots, to include a 25 Livres, 1945 Banque de Syrie et du Liban specimen banknote, followed by 18 lots of early and rare Libya issued and specimen notes, including the key to the series, a Bank of Libya, L.1963, second issue key Type 10 Pound issued banknote.


Also to be sold will be a 1966 $1 Australia specimen and two different Serial #1 notes; a Ming note from China (one of the only known pieces of paper money from the 1300s); a Republika Ceskoslovenska, 1919 Proof Banknote rarity; a rare Vale al Portador, Billete del Tesoro, 1889 Issue Honduras banknote; and a State Bank of Pakistan, 1973-1978 booklet with five different specimen notes.


Offered will be rare and desirable US banknotes, security printing ephemera and US Federal bonds and documents, including a new find 1866, Temporary Loan of 1862, Hessler X134 F, US Treasury, Assistant Treasurer of the US, at Philadelphia, $600 Gold Coin Certificate; over 100 US savings bonds, Liberty loans and Federal documents from circa the 1940s to 2010.


Previews are scheduled for Thursday, March 5 through March 10, at Archives International Auctions’ offices in Fort Lee, NJ, and by appointment. Check the website for viewing times.