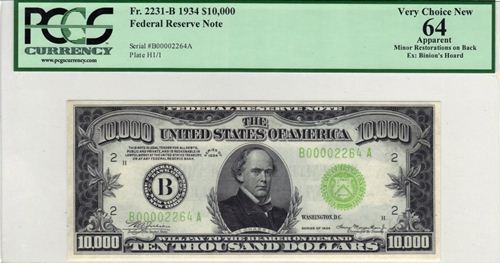 The 1934 $10,000 Federal Reserve Note is the highest denomination of United States currency that was ever legal to own by the American public. This particular note comes from the famous Binion's Horse Shoe One Million Dollar display at Binion's Casino in Las Vegas. Binion had 100 $10,000 bills displayed at his casino and it was a must see attraction for years. The display was dismantled in the early 2000s and the $10,000 notes were sold to collectors. The note being offered here is available for the first time since the original disbursement. The green seal is as vibrant and sharp as the day it was printed. The front of the note has huge margins.


"Binion's Casino $10,000 bills" is one of the tourist attractions in Binion's, that had served as a backdrop for free pictures of visitors. The 100 $10,000 bills, embedded in plastic and displayed in a large horseshoe. Benny Binion is the founder of Binion's Horseshoe in Las Vegas. Binion's entire family was involved in the casino. His wife Teddy Jane managed the casino cage until her death in 1994. His sons, Jack and Ted, supervised the games. His daughter, Becky (later Becky Binion Behnen), managed the kitchen. 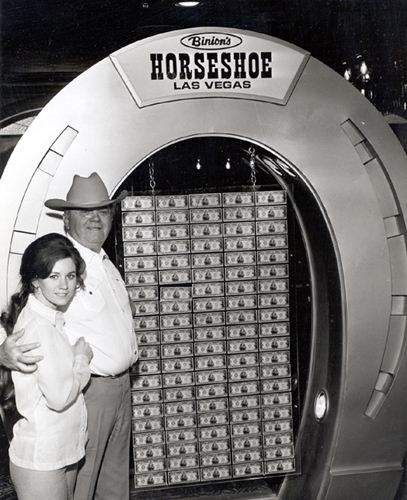 Benny served time in Leavenworth Penitentiary from 1953 to 1957 for tax evasion. He sold his share of the casino to fellow gambler Joe W. Brown to pay approximately $5 million in legal costs. While Brown operated the casino, he installed the famous $1 million display on the casino floor. He sold the display in 1959 and it was later recreated using 100 $10,000 bills by Benny in 1964.


In 1998, Becky Behnen acquired controlling interest in the casino following a protracted legal battle with her older brother Jack. The battle ended with Jack being bought out while retaining a 1% interest in the casino so that he could retain his Nevada gaming license. Behnen became president of the Horseshoe while her husband, Nick, took over as manager.


Behnen implemented several cost-cutting measures, most of which were unpopular with the gamblers. Among the most notable was the removal of the Horseshoe exhibit that held $1 million, having been sold to collector Jay Parrino.


Manifest Auctions is owned and operated by Manning Garrett and Dale Fenton. Both Manning and Dale are longtime dealers turned auctioneers. They use their experience on the dealer and collector side of the market to organize and run auctions that attract high quality consignments and serious bidders.


For more information about the 1934 $10,000 Federal Reserve Note, you can visit Manifest Auctions website manifestauctions.com.