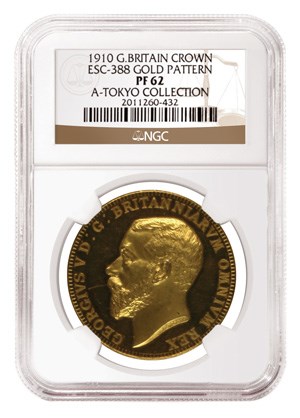 
The Wyon rarity was produced following the death of the British king Edward VII in May 1910. Plans for new coins bearing the head of his successor George V were put into place long before the latter was formally crowned at Westminster Abbey in London in June the following year. A number of designs were submitted to the authorities for approval, one of which was by A.G. Wyon, a member of a dynasty of designers and engravers which had played an important role in British public life for more than a century. Wyon’s design had the bare head of the new king facing left on the obverse while the reverse depicted St George on horseback spearing a dragon with the date below this image.


Despite his illustrious family pedigree, Wyon’s design was not chosen so his Proof Crown in gold bearing the date 1910—the year before George officially became king—became a numismatic rarity rather than standard currency. Only two examples are known and the coin auctioned at Dix Noonan Webb is in virtually mint state. It has been in a number of important collections over the past century. “There has been considerable interest in this”, said auctioneer Christopher Webb, head of the coins department at DNW, before the coin swiftly exceeded its £80.000 to £100,000 estimate.


The 86 lots of proof-record coins formerly in the Melbourne Mint Museum, all of which were certified by NGC, formed an exceptional offering, the like of which will not be repeated as holdings of this size and scope are now exclusively retained by institutions. Proof-record coins were always struck in tiny quantities and were intended for distribution to certain national collections for display and exhibition and for presentation to potential customers. Without exception, proof-record coins are very rare and these lots were surplus sets from the Melbourne Mint Collection. They were originally offered for sale in two tranches in 1988 and 2009.


Dix Noonan Webb Ltd is one of the world’s leading specialist auctioneers and valuers of coins, tokens, medals, militaria and paper money of all types. Established in 1990, the company boasts over 250 years' combined experience in this field and stages regular auctions throughout the year.