lunaticg 8:51:00 AM
The famous 'Running Horse' 10,000 yuan banknote will be offered by Spink China in their 2nd April Auction. The first series renminbi was issued from 1st December 1948 by the newly established People's Bank of China. It consisted of 12 denominations and 62 different types of note. The banknote is estimated to sale for HK$ 550,000 - 650,000.


As the communists continued to liberate much of China, by the late 1940's the Nationalist Government's war effort became more and more laboured. The Gold Yuan certificates already in circulation underwent severe inflation to the extent that a very high denomination of five million had to be issued. Within the liberated areas, each had a different circulating currency with varying exchange rates. This brought great economic hardships on the populace so something had to be done to bring some stability to the currency. The renminbi was issued to unify these local currencies and to simplify day-to-day purchases. 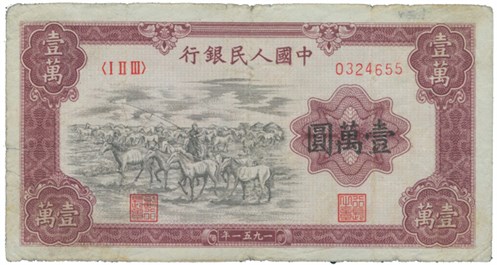 The banknote also known as the "King of PRC banknotes", issued on 17th May 1951 and withdrawn on 1st April 1955 it only circulated for four years. Being essentially an emergency issue the paper and printing quality were poor and this, combined with the high denomination, account for the extremely low survival rate and current rarity.


In fact, it is estimated that only around 100 notes survived, with around 70 serial numbers recorded. There are fewer than 5 notes in good, extremely fine or above condition. From this, we estimate that no more than 100 full sets of this historically vital set of banknotes can be completed.


Although spink note has been graded 'very good', it is whole and largely free from damage and is thus an attractive example. Since this note is certainly absent from most collections, it is likely to be fiercely contested amongst collectors who need it to complete their sets of first series renminbi.